Macarons: Tips, Tricks and How to Macaronnage

A work in Progress 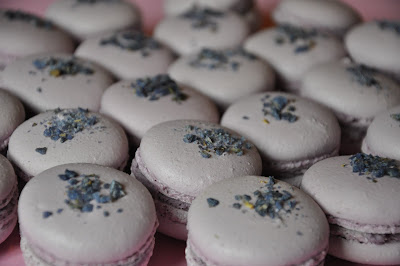 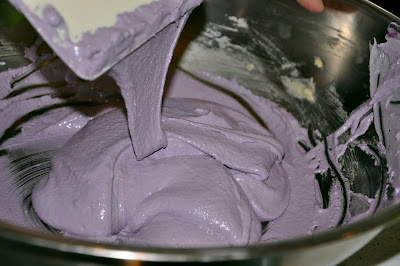 Italian Method
(I prefer this method and have not had a failure yet)
Preparing the Hot Syrup for the Italian method
Get the hot syrup organized first. You will need to use a candy thermometer. The sugar and water are combined in a small pan then stirred continuously with a wooden spoon over medium heat until the sugar is dissolved. It is then brought to the boil. It isn’t stirred once it has come to the boil. The heat is reduced to medium and the sides of pan brushed down with a clean, wet pastry brush. This is to remove sugar crystals and prevent grain forming. When the syrup reaches 115˚C (soft ball stage), start mixing the egg whites using a medium speed.
The meringue
The egg whites are whisked until they appear foamy, then cream of tartar is added. Then it is whisked further until they reach the slip and streak stage and the volume is approximately 8 to ten 10 the original. It is important not to overbeat at this stage. Use a medium to medium-high speed to get a stable foam with uniformed sized air bubbles (speed 6 on Kitchen Aide). A small pinch of dried egg white can be added at this stage to tighten and stabilize the meringue.
Adding the Hot Syrup
When the sugar syrup reaches 118˚C, it is removed from the stove and immediately poured down the side of the mixing bowl into the whipping egg whites. Recipes I have read vary from 118 to 121˚C, so don’t worry to much if it goes over a little. Be careful not to get it on the whisk, causing splattering and possible burns. 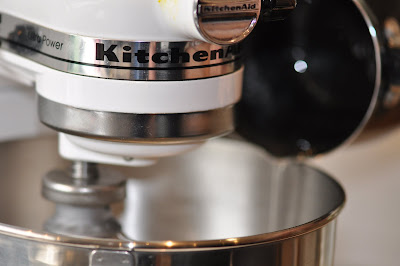 The volume of the whipped egg whites visibly increases. Colour is now also mixed in. Mixing is continued at medium speed until the mixing bowl is cool to the touch and the meringue has thickened and reached a workable temperature of around 35˚C.
Adding the tant pour tant
Before folding with the meringue, the dry ingredients (tant pour tant) are first mixed with a small portion of raw egg whites in a separate bowl to form a relatively firm paste. This is continuously mixed with a whisk so it doesn’t ball.
How to ‘Macaronner’
(or mixing the tant pour tant and the meringue) - this technique is used for the Italian, Spanish and French methods.
The meringue is transferred to a large flat mixing bowl for the Macaronage stage. This is the most critical stage in mixing. The batter has to be mixed to just the right consistency where it is supple and shiny. If the batter is over mixed, too many air bubbles will be deflated. You'll end up with flat, cracked, tough and chewy macarons. Air bubbles are needed to expand with the heat in the oven. This pushes the top of the macaron up to expose the wet part of the batter. If stirred to little, the macarons won't have feet and they will have a peak on their tops.
You will need to do between 40 and 50 turns all up (sliding the spatula under the batter, then lifting and dropping the batter back on itself, always working in one direction and turning the bowl by 1/4 turns at the same time).
Use a spatula to first fold and deflate the batter, mixing the tant pour tant, one-third at a time, into the whipped egg whites. For the first few turns, work fast and be a little robust as you want to knock out some of the air as you mix the meringue and the tant pour tant together (it's different to making meringue for cakes where you have to be delicate). When you have the tant pour tant nearly mixed in (you don't want to knock too much air out either) slow down a little.
Change to a plastic baker’s scrapper and then fold more slowly. 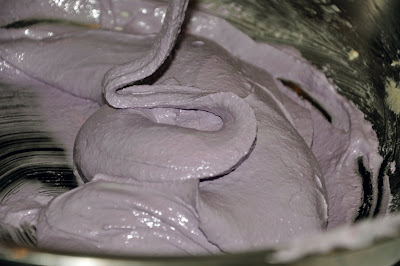 As you work the oils from the almonds batter will become looser. 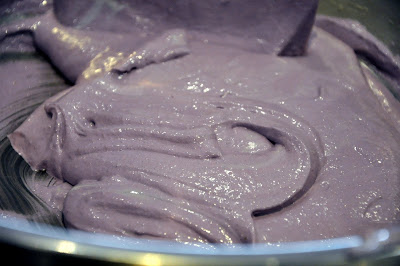 Within a few turns it will change from a dull gritty surface with ridges and lines to a smooth, shiny surface and to what is described as thick flowing magma. In reality, who has seen magma before? This basically means that when you lift and drop the batter back on itself, after waiting for about 30 seconds, the ridges slowly ooze back into the batter. 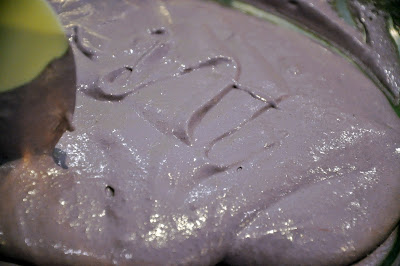 Your batter is now ready to pipe.
Hint:
If you see peaks after you have piped one whole row, it's not ready. Put it back into the mixing bowl and give it a few more turns. When piped, rap the tray a few times on the bench top to get rid of air bubbles. You can also use a wet finger to flatten out the peaks, but you will have under mixed macarons with possible rough areas on your macarons.
Piping
As the saying goes, practice makes perfect.
Spoon the mixture into the piping bag with a #11 - 1cm (1/2 inch round piping tip). The piping bag can be stood upright in a large jug. Silpat mats are preferable to parchment paper as the macarons are easier to remove. When using parchment paper, you may have to steam them off using a spray mist. If using parchment paper, you can draw 2.5cm rounds with a pencil on one side then use the reverse side.
The tip of the piping bag is held perpendicularly over the sheet to pipe the batter (which should be dropped rather than piped). Pipe batter into 2.5cm rounds across the tray stepping alternate rows diagonally 2.5cm apart. Pipe from the middle with the tip about 1cm (½ inch) above. The rounds will spread somewhat. To finish each macaron, the piping tip is flicked upwards with a twist of the wrist to finish or a reverse C can be used to cut off the batter then moved to the next position. If this is done correctly, there should shouldn’t be a nipple on the top, which will should flatten out relatively quickly. 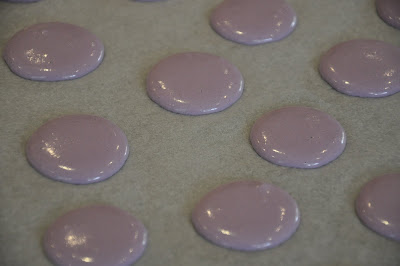 After piping the first row of macarons, look back at the first one and see if the top has flattened out nicely. If not, scrape the batter up and mix to correct it (if under mixed), or add further tant pour tant (if over mixed) or start again. Even if the macarons are not perfect, they will still taste fabulous. When piping is completed, bang the baking sheets a few times against the bench to remove any air bubbles and even out the piped rounds. For the French and Spanish method, the piped macarons are then left to rest until they form a skin and are dry to the touch - about 20 to 30 minutes or more. Touch to see if they are dry and not sticking to your finger. The heat from the oven causes air bubbles to expand inside the piped batter, which pushes up the top dry skin of the macaron. This in turn reveals the inner wet part of the batter at the base and the formation of the “foot” of the macaron. If they are not dried out sufficiently, the batter will expand outwards and it will crack as it bakes. With the Italian method, the batter dries more quickly and they can be baked straight away (if you are game).
- - - - - - - - - - - - - - - - - -
Baking
Preheat convection oven to 150 - 160˚C or conventional to 160 - 170˚C. This is dependent on the recipe and method used and your oven. Note: But first, get to know your oven. Be prepared to experiment a little, use a little trial and error, a have a little patience and persistence as every oven is different. It will pay off in the long run. Convection ovens take less time and conventional oven take longer. Test your oven for hot spots. I use bottom heat only in my oven as the top heat browns the macarons too quickly. It is a good idea to do a practice run with only a few macarons and experiment with your oven to get it right.
Use an insulated baking tray (special double baking sheets that are ideal for macarons – I found mine in the supermarket and they were relatively cheap $14.95 AUD) or alternatively use two baking sheets (one on top of the other without a gap in between) and lay a piece of parchment or silpat on the doubled baking sheet.
Baking time may vary also. Generally, bake macarons for approximately 12 minutes but timing can be up to 17 minutes depending on your oven type and the size of the macarons. It is very important to keep an eye on the baking progress at the tail end of baking time to adjust as necessary. Open the oven and put your finger on one of the macarons. It should be firm with the slightest amount of give. If it wobbles, they require another minute or so.
Once baked, remove the tray from oven and leave the macarons to cool down on a rack before removing from the mat or paper. Don’t pull them from the paper. They should slide easily off the paper once cooled. If they don't place them in the freezer for a few seconds and they will come off more easily. You can also use a spatula, but be careful as the feet can tear. You can also Spritz with a spray water bottle between the parchment paper and tray. This causes steam and helps to loosen the macarons, but they must not be left for too long or they become too moist. 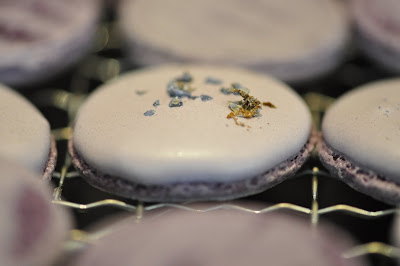 Finishing off
Pair up similar sized macarons, with one macaron turned face up. Pipe approximately a teaspoon of filling on to the turned up macaron, twist the pair together until filling comes just to the edges of the macarons. Place in a small paper cup cake patty to set.
Storing
Keep the unfilled shells in a container in the fridge and they will be more tender. Macarons can also be frozen either with filling or without. Freezing has a tenderizing effect but at the same time, the shells will be weaker than before being frozen. To defrost, remove the macarons from the freezer and place them in the refrigerator overnight. This minimizes condensation on the shells but also gives them a bit of shininess.
Equipment
large flat mixing bowl
rubber spatula
bowl scrapper
electric mixer or Kitchen Aide
sugar saucepan (cheap nonstick supermaket type works well)
Candy/sugar thermometer
insulated baking sheets - so bottoms of macarons don't burn and you get nice little foot.

Or you can find it in smaller bottles