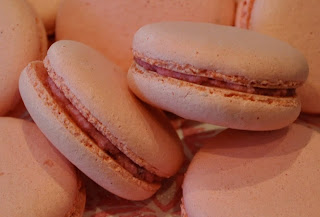 First read through my 'Macarons - tips, tricks and how to' for a great compilation of hints and tips.
We'd (J.A.C.K.) spent the day making macarons. These raspberry macarons were one of the first batches that we made and we were over the moon. We had feet, although small, they were stunning to us. And they tasted sublime.
Ingredients:
For tant pour tant:
300 grams dried almond meal
300 grams castor (superfine) sugar
110 grams egg white
For the syrup:
300 grams castor (superfine) sugar
75 grams (ml) water
For the meringue:
110 grams egg white
3 grams dried egg white
pinch of cream of tat tar
a few drops of red colouring (don't be shy)
Directions:
For tant pour tant - in a food processor, grind the almond meal and first measure of castor (superfine) sugar into fine granules. Most recipes state that to get a delicate smooth macaron, you should sift the almond powder through a fine sieve at least twice (I haven’t found this necessary, as my food processor is quite powerful). Mix in the first measure of egg whites to form a relatively firm paste. This is continuously mixed with a whisk until it is combined so it doesn’t ball.
For the syrup - get the hot syrup organized first before you do the meringue. You will need to use a candy thermometer. The sugar and water are combined in a small pan then stirred continuously with a wooden spoon over medium heat until the sugar is dissolved. It is then brought to the boil. It isn’t stirred once it has come to the boil. The heat is reduced to medium and the sides of pan brushed down with a clean, wet pastry brush. This is to remove sugar crystals and prevent grain forming. When the syrup reaches 115˚C (soft ball stage), start mixing the egg whites using a medium speed.
For the meringue - the egg whites are whisked until they appear foamy, then cream of tartar is added. Then it is whisked further until they reach the slip and streak stage and the volume is approximately 8 to ten 10 the original. It is important not to overbeat at this stage. Use a medium to medium-high speed to get a stable foam with uniformed sized air bubbles (speed 6 on Kitchen Aide). Add the dried egg white.
Adding the Hot Syrup - when the sugar syrup reaches 118˚C, it is removed from the stove and immediately poured down the side of the mixing bowl into the whipping egg whites. Recipes I have read vary from 118 to 121˚C, so don’t worry to much if it goes over a little. Be careful not to get it on the whisk, causing splattering and possible burns.
The volume of the whipped egg whites visibly increases. The red colouring is now mixed in . Mixing is continued at medium speed until the mixing bowl is cool to the touch and the meringue has thickened and reached a workable temperature of around 35˚C. 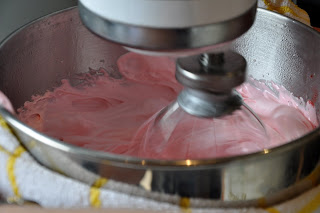 Adding the tant pour tant (the macaronner stage) - the meringue is transferred to a large flat mixing bowl for the Macaronage stage. This is the most critical stage in mixing. The batter has to be mixed to just the right consistency where it is supple and shiny. If the batter is over mixed, too many air bubbles will be deflated. You'll end up with flat, cracked, tough and chewy macarons. Air bubbles are needed to expand with the heat in the oven. This pushes the top of the macaron up to expose the wet part of the batter. If stirred to little, the macarons won't have feet and they will have a peak on their tops.
You will need to do between 40 and 50 turns all up (sliding the spatula under the batter, then lifting and dropping the batter back on itself, always working in one direction and turning the bowl by 1/4 turns at the same time).
Use a spatula to first fold and deflate the batter, mixing the tant pour tant, one-third at a time, into the whipped egg whites. For the first few turns, work fast and be a little robust as you want to knock out some of the air as you mix the meringue and the tant pour tant together (it's different to making meringue for cakes where you have to be delicate). When you have the tant pour tant nearly mixed in (you don't want to knock too much air out either) slow down a little.
Change to a plastic baker’s scrapper and then fold more slowly. As you work the oils from the almonds batter will become looser.
Within a few turns it will change from a dull gritty surface with ridges and lines to a smooth, shiny surface and to what is described as thick flowing magma. In reality, who has seen magma before? This basically means that when you lift and drop the batter back on itself, after waiting for about 30 seconds, the ridges slowly ooze back into the batter. Your batter is now ready to pipe.
Pipe and bake the macarons as per my 'Macarons - tips, tricks and how to' . 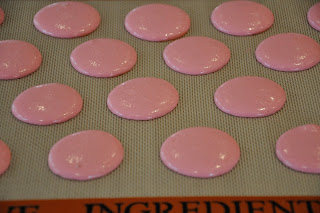 Baking - preheat convection oven to 150 - 160˚C or conventional to 160 - 170˚C. Bake using insulated baking trays. Bake for approximately 12 minutes but timing can be up to 17 minutes depending on your oven type and the size of the macarons.
Once baked, remove the tray from oven and leave the macarons to cool down on a rack before removing from the mat or paper. Don’t pull them from the paper. They should slide easily off the paper once cooled. If they don't place them in the freezer for a few seconds and they will come off more easily. You can also use a spatula, but be careful as the feet can tear. You can also Spritz with a spray water bottle between the parchment paper and tray. This causes steam and helps to loosen the macarons, but they must not be left for too long or they become too moist.
Finishing off - pair up similar sized macarons, with one macaron turned face up. Pipe approximately a teaspoon of the raspberry buttercream or raspberry confiture on to the turned up macaron, twist the pair together until filling comes just to the edges of the macarons. Place in a small paper cup cake patty to set.
Storing - keep the unfilled shells in a container in the fridge and they will be more tender. Macarons can also be frozen either with filling or without. To defrost, remove the macarons from the freezer and place them in the refrigerator overnight. 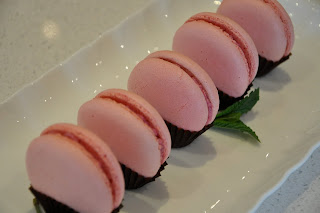 
For the Raspberry Sauce (makes 1 + 2/3 cups)
700 grams frozen raspberries
2 teaspoons fresh lemon juice
2/3 cup sugar
Directions
Have a large heat-proof measuring jug near the stove top. In a bowl beat the yolks with an electric mixer until light in color. Combine the sugar and corn syrup in a small saucepan and heat, stirring constantly, until the sugar dissolves and the syrup comes to a rolling boil. A thermometer is not needed as the corn syrup contains just enough water so that the temperature of the syrup reaches exactly 120° C when brought to a full boil. The heat pasteurizes the egg yolks. Immediately transfer the syrup to the heat-proof measure to stop the cooking. Using an electric mixer, pour a small amount of syrup over the yolks with the mixer turned off. Immediately beat at high speed for 5 seconds. Stop the mixer and add a larger amount of syrup. Beat at high speed for 5 seconds. Continue with the remaining syrup. For the last addition, use a rubber spatula to remove the syrup clinging to the glass measure.


Continue beating until completely cool. Gradually beat in the butter (small pieces at a time) then add 1/2 cup of the raspberry sauce (see below). Keep in an airtight container and refrigerate. Bring to room temperature before using.
For the raspberry sauce - thaw the raspberries in a colander over a deep mixing bowl. Using a rubber spatula, press the thawed berries to force out all the juice into the bowl. Your berries should now measure 1 cup. Pour the berry juice into a saucepan, bring to the boil and reduce it to 1/4 cup. Pour the reduced berry juice into a heat-proof measuring jug. Puree the raspberries then sieve them in a fine strainer to remove all the seeds. Mix the pureed raspberries, reduced berry juice, lemon juice with the sugar until the sugar dissolves. Add 1/2 cup of the raspberry sauce to the buttercream. This is a beautiful sauce, quite concentrated with an intense flavour. It can be kept in the refrigerator for 10 days and also freezes very well for several months and still tastes fresh when thawed. 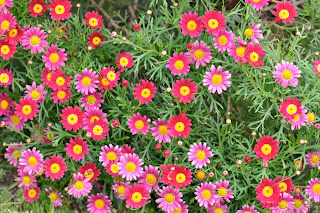